Canary in the Coal Mine - Day 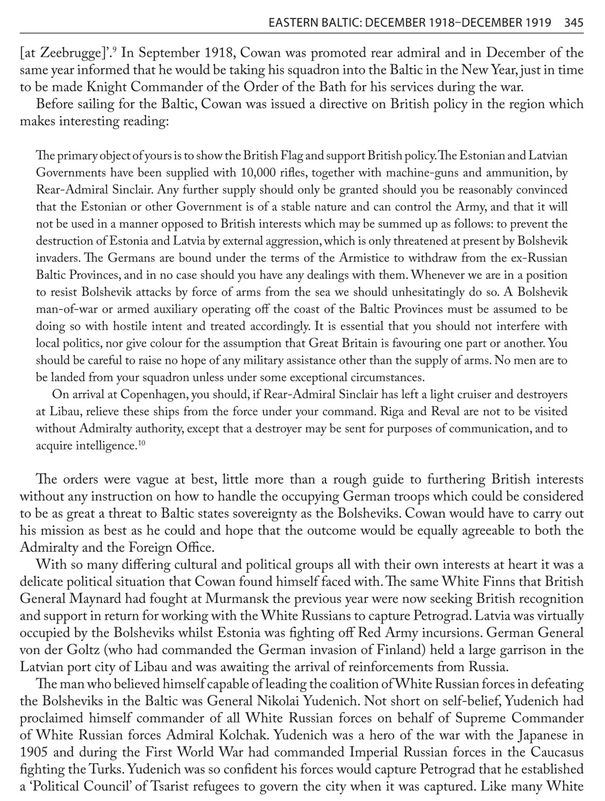 These weak small [Baltic] States, this long thin line, this cordon sanitaire, as it was called in France, was four or five months ago a, subject of the deepest anxiety to all who were concerned with the general problems of European policy, because when you see how weak they were, how short of food, how short of money, how deprived of permanent and well-established institutions or disciplined armies, or organised finances, it seemed almost impossible that, subverted as they were themselves to no inconsiderable extent by the general progress of Bolshevism going on just over their borders, they should withstand any fierce, general, organised attack coming from Russia, and that it would be necessary for the Allies to aid them powerfully, if not indeed with men, at any rate with large supplies of munitions and of money, and in every other way that was possible. These small States have stood. They are intact to-day. They have maintained their existence precariously. Quivering and shaking, but still standing, they have held back not only the Bolshevik armies but the more devastating Bolshevik propaganda which, applied to people in the depths of misery, just recovering from the convulsions of the War, without any of the resources of a civilised State, offers every temptation to internal disorder and anarchy.

“The foundations of world peace are strengthening among all the civilised countries of the world,” Churchill said, “but there is one country that is outside these considerations, and that is Russia. Russia is incalculable, aloof and malignant.

All that line of small new States from the Baltic to the Black Sea are in lively apprehension of Russia. Finland, Estonia, Lithuania, Latvia, Poland and Rumania – every one is in great fear and anxiety about its neighbour.

All are strongly anti-Communist. They have gone through great internal stress and tension, and they have built themselves up on a Radical, democratic antithesis to Communism.

"In a rare peek at official thinking, James Bullard, president of the St. Louis Fed, told Bloomberg last week that the jobless rate could climb to 30% next quarter and that the economy could contract by 50%. That was not counting for the impact of hundreds of billions of dollars thrown at companies by Congress as support to hold on to their workers. But even so, private estimates after the legislation are similar — Goldman Sachs forecasts a 34% economic contraction and 13.2% unemployment in the second quarter, and Deutsche Bank 33% and 12%.

Although no one placed the forecasts in historical context, if we reach anywhere near those numbers, it will be far worse than the Great Recession, and nearly the magnitude of the Great Depression.

[..] In a recent piece in Foreign Affairs, Branko Milanovic, an economist at the City University of New York, describes a new global order characterized by such economic aloneness. It would be “a different world — deglobalization,” Milanovic said in an interview. In what he calls self-sufficient “natural economies,” countries would try to take care of all their needs themselves, and do business as little as possible with other countries. Milanovic foresees the potential for this future to cascade catastrophically: Economies would shrink, living standards would drop, and social glues could consequently break down, leading to the risk that those left jobless turn violent against people who are better off." 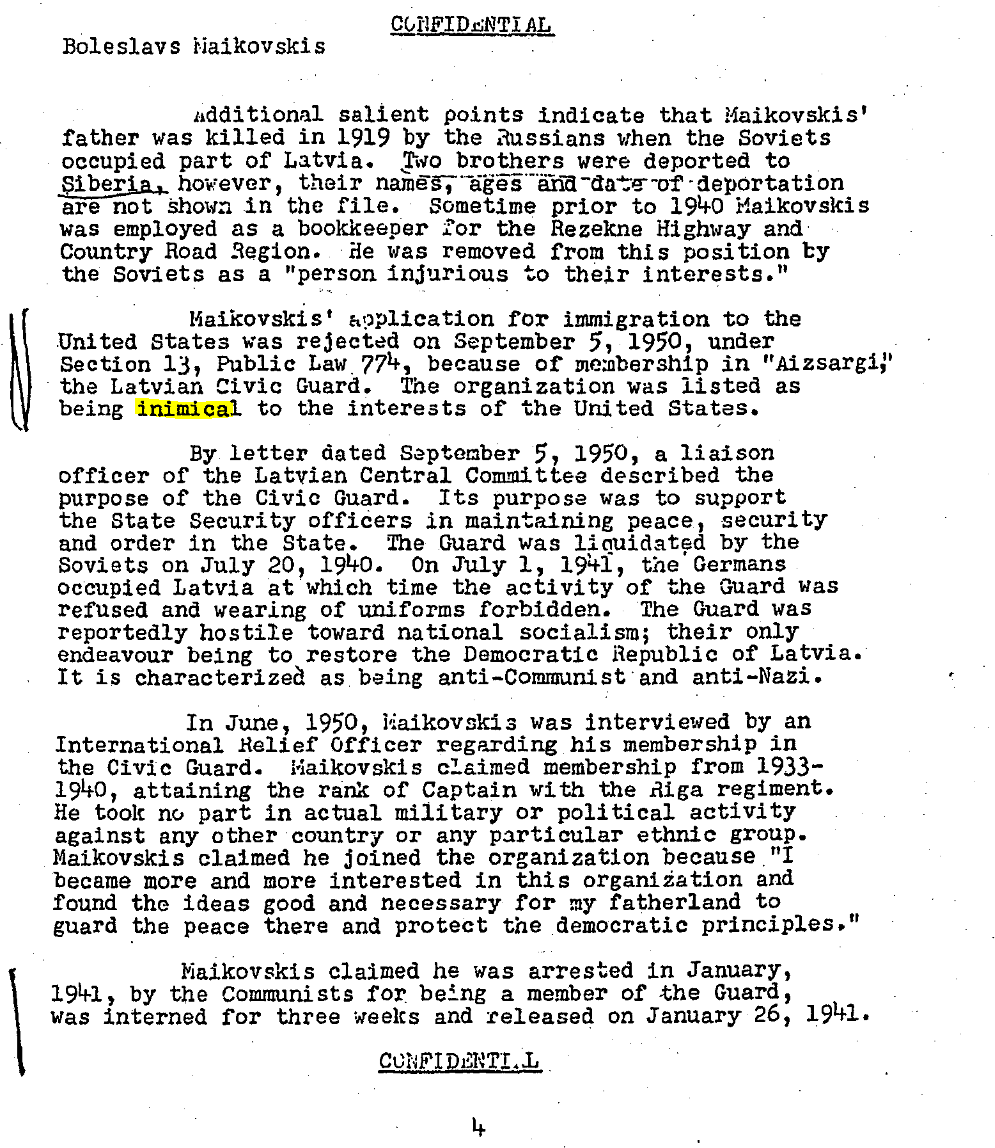 "AECOB, approved in 1950, was a vehicle for foreign intelligence (FI) operations into and within Soviet Latvia and involved infiltration and exfiltration of black agents and the recruitment of legally resident agents in the USSR, especially Latvia. ZRLYNCH was approved in 1950 for use of the Latvian Resistance Movement, which had been formed in 1944, as a vehicle for clandestine activities within the USSR. ZRLYNCH was renewed in 1952 as a part of AECOB, which then provided both FI and political and psychological (PP) activities. AECOB / ZRLYNCH PP project was terminated in 1955. AECOB FI project was terminated in 1959."

The REDBIRD / REDSOX operations involved the illegal return of defectors and emigres to USSR as agents. The REDSOX program against the Soviet Union adopted agent infiltration by parachute as the Office of Strategic Services (OSS) had practiced it in Europe during World War II. CIA then modified - one might say diluted - it, in deference to the impossibility of arranging the ground reception parties used by the OSS, in order to apply it against the Soviet Union, China, and North Korea. In this way, the covert infiltration of intelligence and covert action teams, mostly by air although occasionally overland or by sea, became an endurinq facet of the Clandestine Service's approach to the problem of penetrating closed societies.

As applied by the OSS, the practice later known as "black entry" enjoyed its most notable success with the Jedburgh operation, which after D-Day inserted teams of American and indigenous nationality to mobilize local resistance movements against the Nazis. They armed French resistance fighters, including over 20,000 combatants in Brittany alone, and these cut rail lines, derailed trains, ambushed German road convoys, and cut telephone and electric power lines.

AEBALCONY (1960-62) was designed to use U.S. citizens with Baltic language fluency in "mounted" and "piggy-back" legal traveler operations into Soviet-occupied Estonia, Latvia, and Lithuania.

AEFREEMAN (1953-64), which included AEBASIN/AEROOT (1953-60), AEFLAG (1955-62), and AEPOLE (formerly AECHAMP (1949-59)), was designed to strengthen resistance to communism and harrass the Soviet regime in the Baltic countries. AEBASIN/AEROOT supported Estonian emigres and émigré activities aganist the Estonian SSR. AEFLAG was aimed at people of the Latvian SSR. AEPOLE (formerly AECHAMP (formerly BGLAPIN)) targeted the Lithuanian SSR. These projects provided intelligence and operational data from Baltic countries through radio broadcasts, mailing operations, liaison with emigre organizations, political and psychological (PP) briefings for legal travelers and exploitation of other media such as demonstrations.

AECOB, approved in 1950, was a vehicle for foreign intelligence (FI) operations into and within Soviet Latvia and involved infiltration and exfiltration of black agents and the recruitment of legally resident agents in the USSR, especially Latvia. ZRLYNCH was approved in 1950 for use of the Latvian Resistance Movement, which had been formed in 1944, as a vehicle for clandestine activities within the USSR. ZRLYNCH was renewed in 1952 as a part of AECOB, which then provided both FI and political and psychological (PP) activities. AECOB / ZRLYNCH PP project was terminated in 1955. AECOB FI project was terminated in 1959.